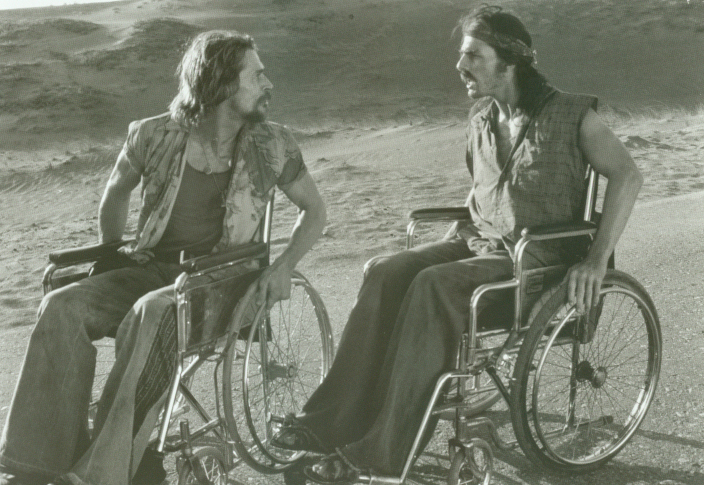 Tanni Grey-Thompson OBE
Paraolympian athlete
My favourite disability film is Born on the Fourth of July as it shows how disabled people are treated medically. Tom Cruise did an excellent job of falling out of his chair drunk! (I laughed in the cinema and so did all my mates. A woman behind tapped me on the shoulder and told me it was disgraceful I was laughing at 'those poor people '!)

When reading this Catalogue you will see that some terms are in quotation marks. Their occasional use indicates that the terms used are not those deemed to be acceptable today. Equally, the quotation marks are employed to identify the rather dubious assumptions of truth applied to some terms which are commonly used but which are equally dubious: 'normal' being a prime example. Terms such as 'cripple', 'loony' or 'retard' are not terms which those who  have been so labelled in the past now choose to call themselves.

This is not a superficial application of what is now called 'political correctness' but is based upon an understanding of the historically negative implications attached to such words and labels which were used to demean and dehumanise disabled people in the past (and still do today). What is more important  however is that one does not merely substitute an old negative label with a seem ingly positive one whilst retaining the negative implication of the old term. So often, labels may have changed but the meaning, the attitude, has not. It is common today to use the term 'cerebral palsy' but  still have  the  attitude  that is associated with seeing the individual as a 'spastic'. One would not now use a title like Michael, a Mongol Boy ( 19 61) regardless of how it treats the subject, but the attitude of a similar modern film piece is often surpr singly similar.

Terminology is problematic: in the USA, for example, the most common word for people with learning difficulti s is still 'retard'. What is important is the understanding and meaning attached  to any given  term. It is vital to recognise that the person is not their impairment. Many disabled people now use the old terms of abuse to describe themselves as a way of appropriating the negative and turning into the positive, much as gay culture has appropriated the term 'queer'. Equally, many non-disabled people will use the  modern  terminology but, underneath, still retain the old attitudes.

A list of films about 'cripples, retards and loonies'  would  fill a book. What is amazing is to see how even the slightest degree of eccentricity is classified as mental illness.

It is worth noting that, in relation to people with learning difficulties, there is a genre to itself: the 'idiot comedy'. Laughing at people has of course always been at the heart of cinematic comedy but  the 'idiot comedy'  has a long and established tradition  that seems to follow the words of La Rochefoucauld when he wrote chat 'We all have the strength to endure the misfortunes of others'. One only needs to look at Cretinetti: L'Apprenti Architecte and Cretinetti: Re dei Giornalisti - and at least a hundred more Cretinetti films made in the 1900s - to see that the tradition  has evolved from theatre and  the comedy skits of the music halls and burlesque shows. Clearly, the genre has retained all its popular and commercial appeal.

One can trace the genre from Charlie Chaplin, Laurel and Hardy and even Harold Lloyd , through the Seven ties BBC TV series Some Mothers Do Have 'Em (starring Michael Crawford), right up to the recent successes of the Farrelly Brothers: Dumb & Dumber (1994), Kingpin (1996) and There's Something About Mary (1998). Fundamentally, the butt of the  comedy  in  the 'idiot'  genre is people with learning difficulties. Although the Farrelly Brothers do subvert the genre to some extent,  their  work, and other films which trade in this kind of  comedy,  are often found offensive by people with learning difficulties.